While Joy and I visit your tree so many times a week, I often think about how positively our lives still intersect. I always knew they would, I just wasn’t sure how but things just seem to happen because of you. It’s just the kind of dog you were here on earth.

I am sure you and everyone over the Rainbow Bridge heard about Pope Francis coming to America. After all, he took the name of the best Saint, St. Francis of Assisi, the one known for his love of animals. It’s no wonder everyone loves him he seems to be more progressive than previous Popes and he enjoys people, just like you did.

When the Pope was here, I watched him and listened to things he was trying to convey to people. One was to be of service and do simple things, one of which was to help an older person who lives alone. And that got me thinking that recently, my friend Cathy, had asked me if I had seen Mr. Bruce. Remember Mr. Bruce? We talked about him on the back cover of the book. He was the Vietnam vet in the wheelchair we would always see fishing around Lake Julia at the park. You sure loved him and he loved you too.

Well, I never told Cathy on Facebook that I did go to see him a month ago and was happy to know that he was still alive but when I saw him he was on oxygen now due to COPD and Emphysema. His tiny apartment in the senior building where he lives, was quite a mess with a lot of mail and junk piled up. He had captured a large snapping turtle and had it in his bathtub. I told him the next time he went to the lake, which he was planning to do that day, to please take it back because his tub was filthy from the turtle poop! It was a big mess and needed some organization. I asked him if he wanted my help because I did not want to impose my wanting it to be clean unless he wanted it. He did. I told him I would call him.

About three weeks went by before I could get back over there and it truly was the Pope’s message that forced me to make the time to go there. I called him on a Sunday morning and he said, “Hi! I was expecting you!” I asked if he would be home and he said he would stay home if I was coming over. His only personal mode of transportation is his motorized wheelchair and this man does get around. I told him I would be over in 20 minutes or so.

Armed with natural cleanser and garbage bags, I went over to see him. Before I looked in the bathroom, I asked if the turtle was gone. “Yes, I put him back the same day after you told me to. Do you know when I put him down, he turned and looked back at me and then went into the water,” he said, smiling. I know he enjoyed the company of the turtle. This is a man who had companion dogs when his wife was alive.

Piece by piece, we went through piles of paper on the makeshift coffee table that stores everything from pills, to junk mail, cell phones that don’t work and one that does, fishing things and Coke bottle caps. In essence, Bailey it was a lot of filth and  junk. So we went through it and he did good, letting me throw a lot of junk away and organizing the rest. I moved his TV to a higher shelf so he could see it better and I dusted the whole area. When I was able to actually see the coffee table and clean it the paper towel turned black instantly.

Of course when our book, Letters to Each Other came out I had left him a copy and he pointed out that he had found it and had put on the shelving system where the TV was. I told him that it was only because of you Bailey that I was there. I don’t know if he and I would have ever talked while he fished had I not been walking you all the time. You were always the conversation starter because of your amazing aura of friendliness. Everyone wanted to meet you and stroke all that soft fur of yours. You were always willing to let people touch you and love you up. I am hoping Joy will take on the characteristic with such a fervor in her later years. She is still a pup.

So Bailey, we did some good this Fall. I wanted you to know that, although I know you were there with me I am sure. You, along with a little nudge from the Pope, inspired someone to get some help and truly it was Cathy’s thoughts about Mr. Bruce that got me going to begin with. We thank her for that Bailey.

I cannot reach out and stroke your fur or give Cathy a hug because we do not live close. The closeness is always accessible. Even if someone is far away Bailey, good thoughts bring us together in action and love. 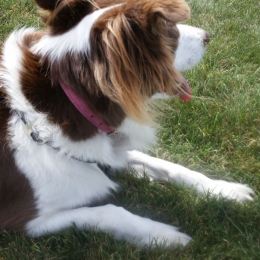 Joy rests at your tree