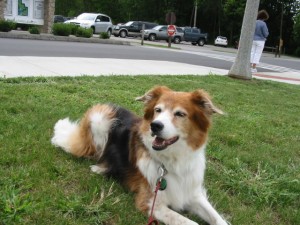 When the weather finally decided to cool down, Bailey and I planned to take advantage of the crisp air and head for our favorite park in Sharon, Pennsylvania. My husband commented to me that I was like “an old person because all you want to do is go to the park, walk Bailey and go out to lunch.” Although I laughed, half-heartedly, I quipped back that he did not realize all he was missing by walking in this beautiful, expansive park.  He said “It’s just a park.”

To us, Buhl Park is not simply “a park.” I revel to see new things there each and every time we walk and this particular day would be no different.  There is a man, we have been seeing in a  motorized scooter most recently who is there fishing with his not-fancy pole, catching catfish. He has an American flag attached to his chair and carries his fishing equipment in a bright green Shop & Save reusable bag. We have chit chatted the last few walks and he is a very nice gentleman. I think he is a miltary vet, and next time I plan to ask him his name. He likes Bailey, as does everyone she comes into contact with, and she makes him smile, which in turn makes me happy.

As we walked toward the one small play area, we saw a set of three siblings flying high on the swings, with the sychronized pushes of their parents. As we got closer, the mom had sat down to take a break and said, “what a beautiful dog you have. Gosh she is pretty.” “Thanks I said, on behalf of Bailey.” “Doggie! Doggie!” one of the little ones screamed out as the wind swept her hair behind her tiny blonde . head. “Hi doggie!”  I waved to her, acknowledging her joyful greeting.

Later when we would circle the entire park, we decided to make one pass around Lake Julia, where the ducks and the big geese  have recently all had babies and the big white Swans are so used to dogs walking through the park, they just sit there and let you say hello up close. We had seen the young boy in the stoller staring upward toward the sky as we walked inside the park, but now his young caretaker –could have been a brother perhaps, was sitting on a bench with the young boy  in the stroller. I think the boy smelled Bailey because he started to stir in his chair and I noticed as we approached he was about 11 or 12 and he was blind and had cerebral palsy. Bailey has always gravitated toward wheel chairs, so I moved her closer. I was not sure the boy could even hear  but I told him she was a beautiful dog named Bailey and was very friendly. I gently took his twisted-up little arm and helped him stroke Bailey’s soft fur. Immediately he was wrangling around in the stroller and, upon feeling Bailey, he gave out a crooked little smile, with all the muscles his little crippled body would allow.  Bailey did not realize it, or maybe she did, that she made a little boy’s day and certainly she made mine because all it takes is a walk in the park….